Amid the challenges presented by the Covid-19 virus, LAX Transmissions is open and ready to serve you. We are closely following CDC guidelines for sanitation and social distancing. Our techs wear new gloves on every job as well as masks. We can get your work done with no personal contact and we thoroughly sanitize when we're finished. If your vehicle needs repair, please contact us today.

Bring your car, truck or SUV in when you need a transmission service.
There are no appointments required and we're available five days a week.


“Thanks for the great service! Its been several months since my rebuild and the transmission works perfect. I have recommended to friends.”


“These guys are awesome! They fixed a minor issue I had with my truck's transmission quickly and the cost was reasonable. They also quoted me a price for a rebuild when it comes time for that. Albert is awesome and the whole crew is honest and hard working.”


“When my clutch went out, I was scared to death and no idea where to go. The first five places I called on the West Side didn't repair manual and the last one was rude and aggressive when I asked for a ballpark estimate before bringing the car in. Albert was the only person who would work a manual transmission on the west side and would give me a ballpark figure. I spoke with Monica and Lydia on the phone who were both professional and affectionate in the way they dealt with me, a customer without a car and in major panic mode. I brought the car in for a diagnosis, which took one day. Albert and I agreed on a price for labor - which was well below what I was expecting. As I suspected I needed my clutch replaced, but parts for an 01' PT Cruiser were either not readily available or were way too expensive - and Albert kept me in the loop the whole time about pricing my parts, and keeping us within budget. Finally, Albert and I agreed we would both save money if I brought him parts that I could buy online. Even with the week it took for shipping, Albert did not stress me out over storing my car there for the time being - and when the parts arrived he had everything installed and running the next day - all for the same original price we had agreed to. Great value, good customer service, family owned and operated - with his sister and cousin handling phone calls - I really felt they took care of me and quoted me an honest and fair price, all the while giving me options as to how to get him the best parts. Thanks Albert and family!”


“I own a Nissan Altima 05. My transmission went out after a year of buying it.. I took it to albert, and he was awesome, helped me with all my hastles between insurance and them...any how, i loved his service. He helped me all the way...and now after 3 years of a new transmission, no problems with it....I recommend this place to any one who has a trouble with their transmission.”


“The best transmission service spot in Los Angeles and LAX area. Most honest prices. Family owned and operated. Speak to Albert or Lidia for amazing quotes/service.”


“My family and I have been bringing all of our cars to LAX Transmission for many years! The customer service that is provided by Albert and the staff is amazing. Albert is always honest, direct, and precise. I'm satisfied with the service!! Thanks LAX Transmission.”


“Very satisfied with the work they did on my 1988 f150 transmission. Truck is running like new. Albert is a straight up man and will not BS you. Highly recommend this place.”


“I have a 2006 Chevy Trailblazer LS. I felt my world spiral when I heard that it was my transmission and knowing how expensive it can be. I went to other shops to get quotes and they didn't ease my concerns. So I went on yelp-and finally ended up at LAX Transmissions, where I was courteously and professionally attended on the phone by Lidia. She helped me get a picture of what I was dealing with and passed my concerns to Albert. By talking to Albert in the first two minutes I knew he was a real one, he was outstanding in clarifying and easing my concerns. The work on my vehicle came out great. I am happy with the service all around. Definitely recommend it. Thanks LAX Transmissions” 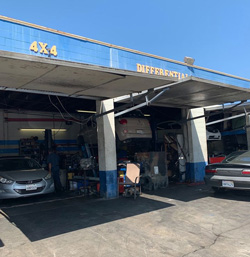 An appropriate diagnosis must begin with any transmission repair.

In reality, modern vehicles can be resolved by substituting sensors and fixing wiring defects which often appear to be a major transmission problem.

But, with no accurate transmission diagnosis, the only thing a mechanic can do is to pay for parts on your car.

LAX Transmissions is a transmission repair shop based in the Inglewood, CA, which is family-owned and operated.

The repair specialties of LAX Transmissions include all types of transmissions; new or old, foreign or domestic, automatic, or manual.